LEDs to the rescue.  And a straight beam of fir. 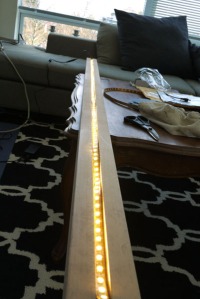 Using a generic 3A LED transformer, I fitted the strip and lit it up for about an hour, checking the temperature on the front and back sides of the strip with an IR thermometer.  It maxed out to about 62C and stayed there.

Eventually, I mounted the strip in an aluminum u-channel, screwed the channel to the wood, and strung the whole thing up with stainless aircraft cable.  The power is still running in from the side, but at this stage I just want to see that it throws the colour and shape of light I want and that the overall structure isn’t a problem.

Eventually, I’ll use a nicer piece of wood, and do more fine soldering work to get the power to come down via the supporting cables and house the transformer in a ceiling mount of some sort.